I’ve mentioned in earlier posts how challenging it can be to find women in a family tree, because they tend to disappear behind their men. During out research for The Cowkeeper’s Wish, one of the biggest brick walls was finding Ellen, our great grandmother’s sister, who left her husband in the 1890s and eventually turned up living with someone else and using his surname, though they had not married. Sometimes women disappear even more completely behind their partner’s name and become “Mrs John Humphries,” erasing every letter of their own identity.

I recently found an example of an elusive woman while engaged in some volunteer work I do for the Imperial War Museum’s excellent Lives of the First World War website. I’ve taken a special interest in the women’s records there, and I was searching specifically for women who’d worked at the Australian Voluntary Hospital in Wimereux, France. I was surprised to come upon a page for Staff Nurse Robert Hannah nee Walter E. C., and wasn’t quite sure where to begin to untangle such a jumble of surnames that could also be first names. I double-checked the original source Lives had used — the women’s service roll at the National Archives — and the name appeared the same way there.

Since it’s highly unlikely that a nurse in 1915 was named Robert, I thought the names were simply transposed, and should read Hannah Robert nee Walter. I searched for a marriage record during the war that would confirm that suspicion, but nothing fit. And then I remembered the “E. C.” that I’d ignored on the entry the first time around. I checked the National Archives record again, this time viewing the digitized version, and saw a tiny crucial “Mrs” beside the name, and left out of the transcription. Mrs. Robert Hannah? That made more sense. I popped in a new search, still within the Lives database, and found that Ella C. Walter had married Robert C. Hannah in Kensington, London, in 1917.

That the marriage took place in London was another bonus, since Ancestry holds those digitized entries of Church of England Marriages and Banns. Here I was able to find yet a little more about the woman so recently known as Robert.

When they married on January 6, 1917, at St. Phillip’s Church, Ella Clarice Walter was a 39-year-old spinster, living at 4 Richmond Mansions, Earl’s Court. Her father’s name was John Charles Walter, and though he was now deceased, he’d been “civil servant, Melbourne,” according to the certificate — another Australian connection for the woman who’d worked at the Australian Voluntary Hospital. Her new husband was considerably older than she was; a widower named Robert Campbell Hannah, he gave his occupation as “gentleman,” and he resided at the Thackeray Hotel in Great Russell Street.

Searching backwards now, I found Ella living on her own in London in 1911, a single 30-year-old woman of private means, born in Melbourne, Australia, a British subject by parentage. What brought her to London I don’t know — but being unmarried, Australian, and keen to assist with the war effort, she was an early recruit for the hospital founded by Lady Rachel Dudley, wife of the Australian governor-general, first located at St. Nazaire, France, and soon moved to an old hotel in Wimereux. The medal roll shows that Ella joined the hospital staff late in August 1914, with the war not even a month old. 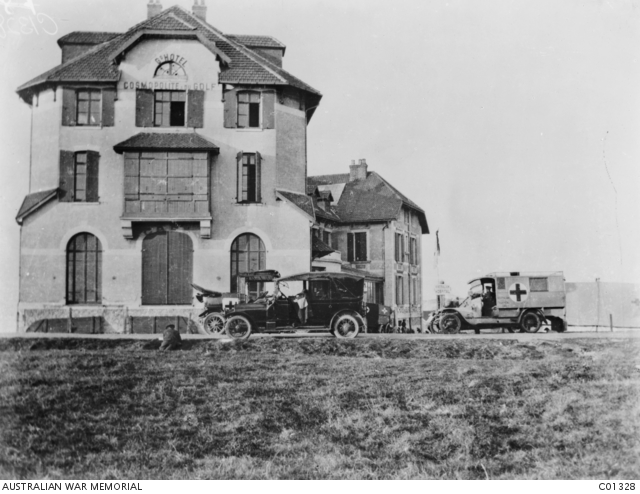 In a 1915 piece about “the good work [the AVH] is doing at the front,” writer Katharine Susannah Prichard describes the setting, and brings the photo above to life:

The Winter quarters of the Australian voluntary hospital are in a great, rambling, muddily-white French hotel. When first you see it, you want to draw it as it stands against the sea, under a clear, shining sky. You feel you want to use a rough chalk for its vermilion roof, and for its shutters and doors that are vivid, apple-green. Beyond it stretch the dunes, vague and formless, with their coarse, wind-threshed, bleached grasses, and behind it spreads a scattered toadstool growth of white-walled, red-roofed cottages. Gris Nez forms a rampart on the north, and there is a deserted, red-roofed village along the coast. The Picardy landscape the hospital stands in is so tranquil in a peaceful, pastoral way, that it is almost impossible to believe, that only a few miles away all the damnable business of war is going on.

When the staff first moved into the hotel, they’d barely had time to settle when word came that a convoy of wounded was on its way. Ambulances began arriving even before the beds had been made to receive the wounded. “They kept on arriving,” writes Prichard, “a continuous, slow stream of khaki-covered cars, with a red cross blazed across them. They came over the brow of the hill, and filed past the hospital from 10 in the morning until after four in the afternoon.” Soon stretchers lined the corridors, and 145 men required the staff’s careful attention.

Knowing Ella’s name wasn’t Robert helped me to find this lovely picture of her and some of her colleagues, posing in uniform. She and the other women depicted are each mentioned, albeit briefly, in the unit’s 1915 war diary. In May, the diary tells us, Ella contracted the measles (as did Patience), and in August, she had a brief stay at a rest home in Hardelot. The diary mentions many of the women resting there, and the Australian War Memorial holds a picture that suggests they were happy to go. I don’t see Ella in the Hardelot photograph, and I lose track of her now until her 1917 marriage to Robert Hannah. What sent her back to London, and was she nursing there as well until she married? These answers might surface if I keep searching. But it feels satisfying to have made even some small discoveries about this stranger, to sort the name and put a face to it, and to reunite a nurse with some of her colleagues from a century ago.

With thanks to Kathryn Shapland, Recollections of War, Albany, Australia, and Christine Bramble, Great War Nurses from the Hunter.