Tracy and I visited Gananoque this past weekend, and participated in the 1000 Islands Writers Festival. If you ever have a chance to go to this beautiful part of Ontario, do! And even better if you can manage to make next year’s festival. The organizers go above and beyond to ensure it’s a wonderful event for readers and listeners alike, rich with music and literary delights. On Friday evening, each of the authors did a short reading. We were asked to choose passages that had to do with the festival’s theme of Life in the Shadows — focusing on the unknown, the unrecognized, the underappreciated. Since much of The Cowkeeper’s Wish is set in the slums of Victorian London, it wasn’t hard to follow the theme. I chose a passage about a woman named Alice Ayres, who stepped out of the shadows under the most tragic circumstances. Here’s an excerpt from the story:

In 1885, one April Friday at two in the morning, a fire broke out at an oil and colourman’s shop on Union Street. Such shops specialized in mixing paints, and when the gunpowder and casks of oil kept onsite quickly ignited, the fire spread rapidly. The shopman and his family, sleeping in the rooms above, were soon woken and trapped by the flames. Neighbours gathered in the street, blankets wrapped around their nightclothes. If Mary and her daughters were there, they’d have seen the horse-drawn fire engine arrive in short order, carrying firefighters with their Spartan helmets, axes holstered at their waists. But it was already too late to lean the ladders against the bricks – flames lashed out of the windows, and heat from the burning oil emanated from the building.

When a woman appeared in a third-storey window, neighbours called to her to jump, but she disappeared from view. The smoke curled in the crisp spring air, and the crowd grew thicker, faces lighted by the glow of the fire. And then the woman reappeared. She pushed a feather mattress through the window to the ground, and the crowd called again to her to jump, but instead she lifted a small, startled girl, about five years old, up to the window ledge and dropped her to the mattress below. She slipped away and returned to the window with another girl, this one smaller than the last, crying and clinging to her, refusing to be dropped. But the woman threw the child out and someone held up their arms and caught her. Once more she returned, with the smallest girl yet, and dropped her to the mattress.

The voices in the crowd were ragged now, screaming to the woman to save herself. They could see that she was losing strength and having trouble breathing. She tried to push herself from the window, but fell from the frame, and on the way down she struck her head on the shop sign below. She landed head-down, cracking her spine, and though she was rushed to hospital and did regain consciousness, she died soon after.

The woman’s name was Alice Ayres. She was sister-in-law to the oil and colourman who owned the shop, and nursemaid to the little girls she had released through the window one by one. Once the blaze was put out, the remains of Alice’s sister, the girls’ mother, were found inside, along with a son and the oil and colourman himself, holding a locked box of cash, terrified of losing everything he owned. The obvious horror of the family’s last moments affected the neighbourhood deeply, and captured the imagination of the larger population as well, fuelling a rumour that as Alice had lain in hospital, Queen Victoria had sent a lady-in-waiting to inquire about her worsening condition.

The event was a tragedy, but also appealed to the Victorian love of melodrama and sentiment. Reynolds’s Weekly Newspaper called Alice Ayres “a humble heroine,” and asserted that “Such a woman, although only a poor domestic, deserves to be placed among the small but noble army of martyrs to duty.” Mourners flocked to the memorial service at St. Saviour’s, so many that there was not even standing room left in the church. Those in the back strained to hear the words of the minister, who preached a sermon about heroism. Nearly a thousand coins were raised, and it was said that the money would go toward a memorial window for Alice Ayres when the church was restored to its original splendour. Overnight, she had gone from anonymity to working-class heroine, and in the years to come, White Cross Street, running parallel to Red Cross Street, would be renamed Ayres in her honour. She’d undergone a near canonization, with gilded poems and stories written about her selfless duty and devotion. To the growing number of social reformers, Alice Ayres was an irresistible example of what every woman of the lower class should strive to be: hard-working, loyal and self-sacrificing. 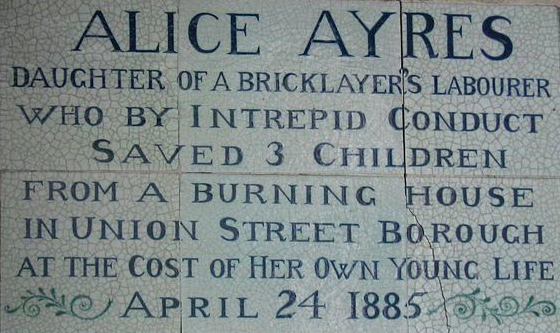 4 thoughts on “Out from the shadows: Alice Ayres and the Union Street Fire”