We’ve written about thieves aplenty in our book and on this blog too, even delving into stories about child thieves — but here’s a new twist: thieves who stole from children.

In searching out events that occurred on Red Cross Street, Southwark, where our family lived for generations, I came upon a newspaper article dated May 1893; it told of a 19-year-old woman named Mary Ann Blacklock, who’d pleaded guilty to several indictments for stealing the boots and clothing of nine-year-old Alice Fentum, the daughter of a labourer who lived in Red Cross Street.

On Good Friday, Alice was sent out on an errand, and soon encountered Mary Ann, who encouraged the girl to walk with her. They ambled for close to two hours, and ended up in a neighbourhood far from Alice’s home. They spent the night in a wash house, and in the morning, Mary Ann crept away with Alice’s boots under her arm. When Alice woke, she wandered out into the street and found a police constable, who returned her to her parents. Mary Ann was known to the police; it was said that she regularly “waylaid little children coming home from school, took them away to some secluded place, and stole their clothing.” She’d been convicted of similar offences several times before, and this time was sentenced to seven months hard labour.

But she wasn’t the only such thief. A quick search in the British Newspaper Archive, using terms like “robbing a child” and “stealing from children,” turns up plenty of examples. (Have a look at the headings in the list of articles below.) 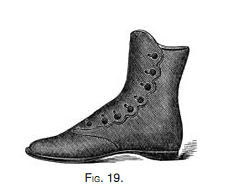 In March of 1865, a woman named Ann Kernow stole a shawl from a five-year-old girl, and cried on being apprehended; and in July of 1873, Isabella Miller stole a little girl’s worsted stockings and hid them away in the passage of the dwelling where she was living. In January of 1890, Jane Burnside was charged with stealing (and of course pawning!) a pair of boots that belonged to her four-year-old niece. “PC Marshall said that when he took Burnside into custody she replied that it was all right. This was her 19th appearance.” Jemima Bennett, charged in 1899, had a similar “bad record,” and was sent to the Sessions for stealing from a five-year-old: she “took her shawl from her and made off.”

It’s hard to imagine sinking to such a low, no matter how desperate life becomes, but the whole story can never be told in a tiny newspaper mention, or even in court records. Ancestry holds an absolutely engrossing stash of records for females convicted for stealing skirts and boots and umbrellas and even bacon; sometimes the documents include startling biographical information — “husband and child in the same gaol” — and sorry looking mugshots reminiscent of the asylum photos that included our Ellen Evans. An initial search through the criminal database has not turned up any of the thieves-of-children mentioned here, though some may be lurking under different names.

Just the same, there are clues in the newspaper accounts that add detail to their stories. In April of 1892, Emily Blaber, “a servant out of situation,” was remanded for stealing a pair of boots from a five-year-old girl. And on Christmas Eve in 1897, Elizabeth Cook was charged with stealing a child’s jacket.

“The child was looking in the window of a sweetstuff shop at York-road, Battersea, when the prisoner went up to him and said, ‘Ain’t the sweets nice?’ She gave the child a halfpenny, telling him that she would take care of his coat while he entered the shop for some sweets. As soon as he entered the shop the woman made off with the coat. A working man named Winkworth Harbourne, of Belfern-street, Battersea, who had been watching the prisoner’s movements, went after her and gave her into custody. It was mentioned that the prisoner had been previously convicted for a similar offence. The magistrate said there was no more detestable creature than the thief who preys on the innocence of young children.”

Even if the jacket — or the money she’d get for it — was intended as a present for Elizabeth’s own child, the crime is despicable. But what drove these women to such measures in the first place? In both the newspaper accounts and the criminal register, many were repeat offenders. Throughout September of 1898, under the heading Apprehensions Sought, the Police Gazette ran three subsequent notices about Mary Ann Blacklock, the woman who had led little Alice Fentum out of Red Cross Street five years earlier:

A Guide to Researching Female Offenders

3 thoughts on ““There is no more detestable creature …””